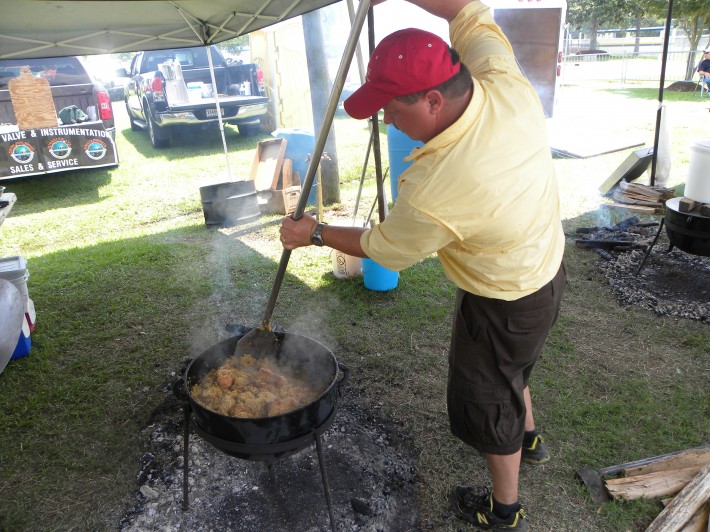 Everyone in competition at the Jambalaya Festival in Gonzales in May cooks in a black pot over a wood fire.

Every Wednesday  starting today I plan to post a new encounter with people who have a passion for their lives and how they practice that passion. This is sometimes called folklore, sometimes oral history, sometimes a conversation, and to me it is always fascinating. I’ve gathered a lot of video footage and stories of people, mostly in Louisiana, often food culture related, because for me that is a window onto the matrix of life. In Louisiana food and how we think about it,  matters. It is in our memory, our future, our everyday itinerary and our personal repertoire of competency and consideration. People elsewhere always comment on how people from our state seem to have so much joie de vivre, vitality, creativity or just brightness. Well, “One Man’s Meat” will explore these qualities and more. Usually through the prism of our food culture. The good news is you don’t have to take my word for it. You can experience it with each new little video vignette– a glimpse into what its like to know real Louisianians, and to get out in the field, the swamp, the bayou, with them. Cook-offs, boucheries, festivals, we’re out there stirring the pot, if also keeping the faith.

Everywhere you go in Louisiana everyone has a black pot– usually several. They come in many forms and harken to “the olden days”. Families collect them and pass them down to children, grandchildren, nieces, nephews, and maybe  cousin or two. The anthropologist Ray Brassieur, at the University of Louisiana at Lafayette, has a large collection of family heirlooms: skillets of all sizes, dutch ovens, and the like. When we interviewed him I had told him the black pot is a story I’ve been chasing since the beginning. He fondly laid out his whole family museum of pots and skillets for us and I’ll show you those sometime in the future. His collection carries a family story with each one and there are also remembrances for each ding and rivet in the non cast iron ones. This is true everywhere I’ve talked with people about their cooking: Bayou Teche, on the coast to Bayou Lafourche, to the Atchafalaya Basin, to the Red River, to Cane River, and the Missisippi River. Louisiana cooking starts as “one pot” cooking. The simple ingredients mix and balance flavors, while techniques of knowing when to add things at the right moment for maximum effect is an obsession and an art form. For us the one pot dish– that is to say a gumbo, an etouffee, rice and gravy, jambalaya– is a buffet of balanced and distinctly musical flavors that dance on our sophisticated palates. 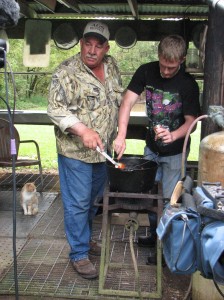 If New Orleans could be called the soul of Louisiana cooking, then St. Landry Parish might correspondingly be called the heart of Louisiana cooking. Here, centered well north of the population center of Lafayette, live the people who carry on traditions that are fast disappearing in the rest of America and which they almost lost themselves. When I talk about this area, it’s Opelousas along Hwy 190, through Eunice (the boudin capitol), up to Mamou and Ville Platte (the smoked meat capital), and back around through Plaisance and Washington. Raising, butchering, smoking and cooking hogs and beef is still carried on in small holdings. Meat markets provide quartering, carving and processing services. Sure the number of slaughterhouses has dropped to only eight, but alongside of that, there is a whole layer of younger people in their late thirties and early forties who are carrying on traditions and exchanging knowledge that is as meaningful to the survival of Louisiana’s unique culture as, well, it’s music.

The pleasure of Louisiana cuisine starts with the meaning and use of the black pot– a  hefty thing, well-made and with weight in the hand when you pick it up. Something that outlasts a lifetime, something that sustains, and thereby requires memory, respect and hard use. That is to say, attention. Attention to detail, to freshness, to locality, to  the people for whom you are using it to cook. So, the beginning of our journey visits Mike McGee, owner of Guillory’s Wholesale in Mamou, who supplies black pots to a large number of shops, groceries, meat markets and service stations around the state who at retail keep everyone supplied with new black pots. Mike happens to be the grandson of legendary Cajun musician Dennis McGee, and has stories of his own. But today he’s lending a bit of practical advice, just in case, as I thought, you might want to buy and keep a black pot of your own.

You’ll have to check (for now) my documentary “No One Ever Went Hungry” for Cajun food traditions in context as they are practiced today. But I thought I’d share a bit of the stories and material beyond the show and the rest of the food documentaries I’ve created and plan to produce. “One Man’s Meat” is the benefit of my culinary travels and research. Feel free to ask questions…