No One Ever Went Hungry

This program is an intimate look into how Cajun culture sustains itself through food traditions, social spaces, mentoring, family values and an appreciation for Louisiana’s abundance of food ingredients and dishes. We’ve tracked everything from andouille to chaudin, oyster fricasse to boiled shrimp and crawfish bisque. We’ve traveled field to bayou to deep in the Atchafalaya Basin. We can tell you where specialty meats are to be found and who’s got the best (commercial) boudin. Collaborating once again with Director of Photography Neil Alexander, who has filmed all our food documentaries, we haven’t ignored Mamou, Pierre Part or Delcambre. Neil’s work has established the unusual insider’s perspective that is our signature. Now to make it all into a good story that will surprise and delight you and maybe even change your mind about what Cajun cooking really is!!! THIS PROJECT IS FUNDED THROUGH GRANTS FROM: THE LOUISIANA ENDOWMENT FOR THE HUMANITIES AND THE NATIONAL PARK SERVICE in association with SOUTHERN FOOD & BEVERAGE MUSEUM. Documentary: No One Ever Went Hungry: Acadian Food Traditions Then & Now WYES, Channel 12, New Orleans has scheduled our show to premiere in May. LIVE PREMIERE SNEAK PEEK EVENT SOUTHERN FOOD AND BEVERAGE MUSEUM FEBRUARY 20, 2011, AT 2 P.M. THANKS EVERYONE WHO ATTENDED !!!! AND BAYOU TECHE BREWERY FOR THE LIBATIONS !! 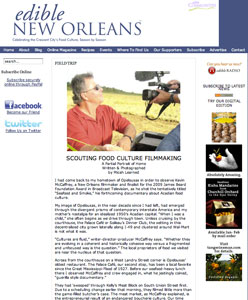 I had come back to my hometown of Opelousas in order to observe Kevin McCaffrey, a New Orleans filmmaker and finalist for the 2009 James Beard Foundation Award in Broadcast Television, as he shot the tentatively titled “Seafood and Smoke,” his forthcoming documentary about Acadian food culture…

Read more about the filming of this documentary on the Edible New Orleans website.

No One Ever Went Hungry: Acadian Food Traditions Then & Now will premiere at the 2011 Wood’s Hole Film Festival on August 2nd. The premiere is scheduled for 5:00 PM at Wood’s Hole, Massachusetts. 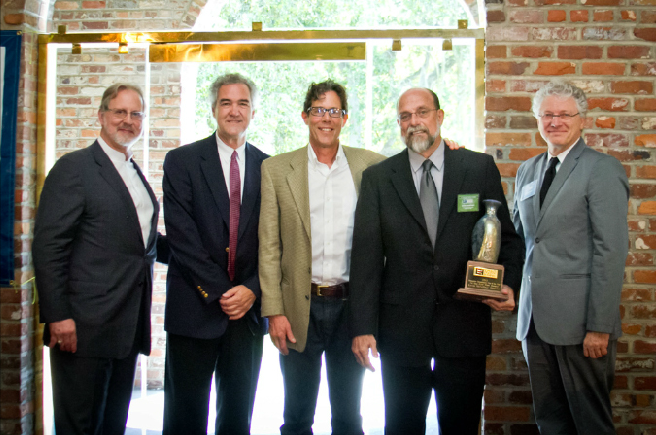 "No One Ever Went Hungry" awarded the 2012 Louisiana Humanities Documentary of the Year!